Chris Hayes: Ending Slavery Was A ‘Much, Much, Much Bigger Deal’ Than Obamacare

Chris Hayes: Ending Slavery Was A ‘Much, Much, Much Bigger Deal’ Than Obamacare 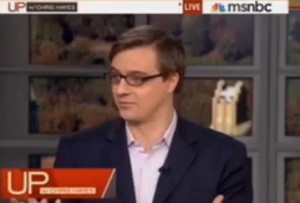 The political news outrage-o-sphere has become an invisible character in the drama that unfolds on our cable news shows, as evidenced by a segment from Saturday morning’s Up With Chris Hayes. During a panel discussion that included Lincoln screenwriter Tony Kushner, host Chris Hayes drew parallels between the film’s depiction of the passage of the 13th Amendment, and the sausage-making that resulted in the Affordable Care Act, or Obamacare. Along the way, though, Hayes felt compelled to note, for the potentially outraged, that “for the record, the 13th Amendment is a much, much, much bigger deal than the Affordable Care Act, lest anyone think I’m equating the two.”

Hayes began by observing that Kushner’s film Lincoln, which focuses on the pragmatic machinations of the Great Emancipator, changed his own progressive purist view of the deal-making that went into passage of the Affordable Care Act. “I’m a supporter of the Affordable Care Act, “he said, “and I think the outcome is really going to increase the net life joy of human beings in the country.”

On the other hand, Hayes added, “there was something about the way in which that process unfolded that ultimately tainted my judgment of the final product,” but that “watching the story of how the 13th Amendment was passed, in which there are essentially just a bunch of hacks bribing congressmen, made me think, ‘Well, I guess you can sort of separate means from ends.”

Hayes’ attitude about the Affordable Care Act was shared by many liberals, myself included, but in hindsight, the front-loading of negotiations with health insurers and pharmaceutical companies may have been what allowed health care reform to get the wind in its sails necessary to push it, by inches, to passage. Leaving things like the Public Option and drug price negotiations on the table might well have acted like chocks on the act’s landing gear, preventing it from ever getting rolling.

The allegorical link to Lincoln‘s portrayal of abolition is solid and crystal clear, but toward the end, Hayes amusingly felt the need to disclaim his segment by saying “Let me just also say, for the record, that the 13th amendment is a much, much, much bigger deal than the Affordable Care Act. Lest anyone think i’m equating the two.”

It was amusing, first, because Hayes is probably right, there are probably people waiting to jump on any little thing he says in order to twist it into something sensational (where such creatures exist, I cannot begin to say), but also because the incessant ref-working of the internet seems to have made Hayes step a little too far back from what is a rich illustration of health care reform’s importance.

Hayes is essentially correct that there is no apples-to-apples comparison to be made between the Affordable Care Act and the end of slavery (although the ACA does address disparities that persist from our racially divided past), especially in terms of not only the fundamental barbarism and injustice involved, but the ways in which they respectively changed, and can be expected to change, the course of history. However, there are ways in which the comparison illustrates the rightness of heath car reform, and the ways in which history will judge its opponents.

Much of the way mainstream America views slavery and racial injustice is filtered through a lens of mainstream (read: white) cultural self-forgiveness that mitigates things like racist cartoons and discriminatory policies, which takes the form of phrases like “Well, it was the times.”

The truth is that the barbarism and injustice of slavery was obvious to a great many people for a very long time before it was ended, and when we look back on that time, we wonder how any human being could justify enslaving other human beings, even as we pat ourselves on the back for eventually ending the practice. We look back now and wonder how it could not have been obvious to our founders that “all men are created equal,” not to mention the women. Presumably, we’re a more enlightened people.

But it’s the 21st century now, and the Affordable Care Act is just the first step (albeit a monumental one) in recognizing the barbarism of letting our fellow citizens die for no better reason than fealty to an unjust status quo that weighs their lives against corporate profits. It goes beyond merely letting people die because they’re poor, although that’s a big part of it. Even people with reasonable means, under certain circumstances, can find themselves out of luck, and out of life, under the pre-Obamacare system.

To whatever degree we should have advanced in the 150 years since slavery, shouldn’t this injustice be more obvious to a presumably less primitive people? To the extent that slavery-era Americans knew better, or should have, aren’t present-day Americans more guilty of knowing better, and not acting? Yes, we managed to pass the Affordable Care Act by the skin of our teeth, but in this allegory, it’s only a first step, an Affordable Emancipation Proclamation, that will still leave some to fall through the cracks. The 13th Amendment was a much, much biger deal than the Affordable Care Act, but maybe not a much, much, much bigger deal. We should have learned more, since then, than we have.

Here’s the clip, from Up With Chris Hayes: