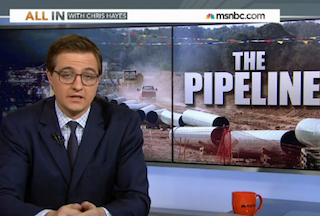 Following the release yesterday of the State Department report on the environmental impact of the Keystone XL Pipeline, MSNBC’s Chris Hayes delivered a blistering rebuke of America’s dependence on fossil fuels, likening President Barack Obama’s apparent willingness to embrace the project to a drug addicts trapped in a “self-destructive cycle.”

As The New York Times’ Coral Davenport reported, “The conclusions of the report appear to indicate that the project has passed Mr. Obama’s climate criteria, an outcome expected to outrage environmentalists, who have rallied, protested, marched and been arrested in demonstrations around the country against the pipeline.”

Showing a clip of Obama pushing his “all-of-the-above energy strategy” at this week’s State of the Union, Hayes remarked on the “addict’s” tendency to “procrastinate and irrationalize.”

“We have a chemical dependency and we need to break it,” Hayes continued, “or we’ll raise the temperature of the earth so much it will invite massive risk of widespread catastrophe, disaster and misery.” That’s why so many climate change activists oppose the Keystone XL Pipeline, he explained. “If we say we’re going to quit today and then push it off until tomorrow, we are not quitting, so let us not fool ourselves. If we spend billions of dollars to tap an entire new keg, a dirty keg at that, we are not quitting. We are sinking further into our dependence and self-destruction and dissolution.”

“Everyone who breaks free of any addiction digs down and finds some inner strength to say no, to stop, to say this is the day I start to turn my life around,” Hayes concluded. “And the question is whether we as citizens, and Barack Obama as a president, as a human being, can find that strength within himself.”