Chris Matthews’ Epic Rant On Romney: ‘He Wouldn’t Be Caught Dead At A Tea Party Meeting’ 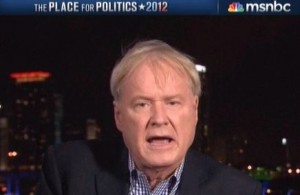 During MSNBC’s election night coverage of the Florida GOP primary, Chris Matthews went off on a lengthy jeremiad against Mitt Romney about how his wealth has made him out of touch with the majority of Americans. “His family has all they want. They’ve gotten their take,” Matthews harangued. “When you’re hiding your money from the tax collectors so that you can have a fatter life, you don’t identify with the person trying to scrabble along making it in our society, who is a true patriot, left, right or center. Why are you hiding your money overseas if you are a patriot? It seems like you are part of the problem — in fact, you are one of the bad guys.”

“I think he has a very, very difficult time identifying with the yearnings of the American people for a better country and he’s earned that problem,” Matthews jabbed. “He has not identified with the revolutionary struggle of this country for its last 200 years. It is not anywhere in his bones, a revolutionary, anywhere in his bones, is he dissatisfied with the America he was born to — he was born to that weird small portion of America that had it happened to him. He says he didn’t inherit it, he inherited everything: his education, his status, governor, father head of an auto company. Everything about him basically happened to him.”

“He wouldn’t be caught dead at a tea party meeting,” Matthews added. “It is below him and I think they know it…he’s never been in any movement. He’s benefited from the way things are. How can he pretend to be at the barricades?”

Watch Matthews’s comments below via MSNBC: