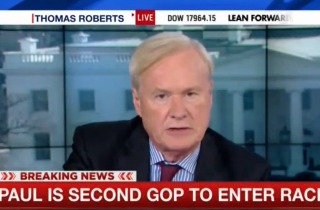 MSNBC’s Hardball host Chris Matthews had some surprisingly supportive words for newly-announced GOP candidate Sen. Rand Paul (R-KY) on Tuesday afternoon; and some aggressive thoughts about the attack ads being run by various conservative groups against the libertarian-leaning senator.

During a post-announcement speech interview with Thomas Roberts, Matthews praised the Kentucky senator for saying, in his paraphrase, “I’m not for nation-building overseas, I’m for building bridges here, not over there.”

Such anti-interventionist words were “a charge against the neocons and the piggish money behind them right now,” Matthews said, before laying into how that wing of the Republican Party is “a rotten crowd that is very hawkish… and wants to fight more wars and get more regime change.”

More from his monologue (emphasis added):

They wanted to knock off Iraq, then they wanted to knock off Egypt, they wanted to knock off Syria, they want to knock off Iran and they already did Libya. It has really worked well for us. This continued effort to knock countries apart, create instability and chaos, and then say, “We’re gonna create Western-style, pro-Israeli-style democracies” — It’s all nonsense it’s always been nonsense. I think the Republican voter — not the piggish money people — but the regular voter is not going to stand for it. Look at the latest poll from Pennsylvania, a regular state. Pretty much a bit Democratic but not too Democratic a state. Rand Paul is beating Hillary Clinton by a point. That tells me that all of this money — this piggish machine, that is the term we used in the ’60s for the hawks — all of this money that’s trying to create a right-wing hawkish Republican for president may not sit too well for the average Republican voter because the cloth coat regular Republicans who send their kids to war are not the one who pay for these ads. They are totally different people. The ones who send their kids to war and come home maimed, and wondering what they hell they’re doing it for — those people are not impressed by these goddamn ads. I wouldn’t talk about these ads and I certainly wouldn’t put them on for free. Stop running right-wing ads for free on our network.

Roberts objected to the idea of not discussing the hawkish ads on MSNBC air, saying these attack ads are relevant to ongoing conversations about the Republican primary. When he noted that the latest ad was paid for by the Foundation for a Secure and Prosperous America, a 501(c)(4) group, Matthews went off again:

What the hell is that? Come on. What are they? Committee on the Present Danger. They’re all front groups. They’re hawkish right-wing front groups — call them what they are. Let’s not pretend like some nice people got together and thought we had to go to war and nation-build and knock off another government. That’s what we’re doing. And I salute Rand Paul for having the guts to take on this crowd. He may be the only Republican candidate doing it, which makes him worth watching it.