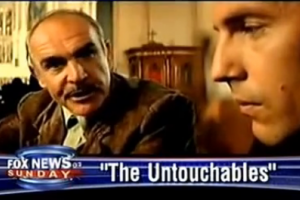 Someone at Fox News must really like The Untouchables. On Fox News Sunday, Chris Wallace followed in Glenn Beck‘s footsteps of last week, playing a clip from the gangster film to underscore the Obama administration’s “Chicago way of doing business” in retaliating against Fox for its unfavorable coverage.

One of the panelists on the show was former Bush White House Press Secretary Dana Perino, who jumped on the Chicago gangster meme and took the opportunity to make her former boss look good by comparison (transcript via Think Progress):

Wallace: Dana, the latest chapter in the Chicago way was that the administration made an effort this week to use the White House pool — all the five major networks — to try to exclude Fox from interviewing ‘pay czar’ Ken Feinberg.

The White House now says, Well, it was just an honest mistake. Question: When you were in the Bush White House, did you ever try to do that against CBS when they were trashing President Bush? Or do you know of any White House that’s ever tried to use the White House pool to eliminate somebody, to kick somebody out?

Perino: Certainly not with the pool. I mean, there are ways to exclude doing interviews with other networks, such as what happened to Fox News about four weeks ago when President Obama did all the other networks and decided not to do this one.

But you never use the pool. It’s a huge no-no. And I was glad to see that the reporters in the room decided to stand up and have solidarity, because they could be next in this Chicago-style way.

Perino later compared Obama’s Fox News freeze to Hugo Chavez shuttering Venezuelan TV stations: “If you look at some of the coverage of what mainstream media covers when somebody like a Hugo Chavez shuts down television stations, he calls them illegitimate.”

The difference between Beck’s Chicago gangster references and Wallace’s underscored the division between the opinion side of Fox and the news side, shaky as some would accuse it of being. On Friday, a baseball bat-wielding Beck ran a clip of the infamous scene from The Untouchables in which Al Capone caps off a speech on teamwork by repeatedly striking one of his lieutenants with a bat. On Fox News Sunday, Wallace played a much milder clip featuring Sean Connery‘s Irish cop, and prefaced it with “what some” — Kim Strassel? — “are calling the Chicago way of doing business.”

Still, the segment provided further evidence — not that we were short on it — that as long as the Obama administration slights or seems to be slighting Fox, the network will take every opportunity to push back as it covers the story of its own ill treatment.

And here’s Beck on Friday: