Christiane Amanpour Uses Such A Fancy Word, ABC Has To Define It In A Graphic 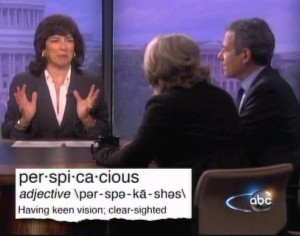 This is either unintentionally hilarious or merely bizarre, but either way it seemed worthy of some attention. On This Week, during an extremely sophisticated and insightful debate on the importance of the Constitution, Christiane Amanpour apparently attempted to keep the conversation at an elevated level of intelligence by showcasing an SAT-worthy word in the middle of her statement. Amanpour casually said “perspicacious,” yet dropping such a big word apparently served as a bat signal for the ABC graphics department to go into emergency action!

Amanpour’s guest mentioned Benjamin Franklin wrote that he wouldn’t mind being preserved in a “vat of Madeira wine” in order to see if the Constitution held up 200 years later. Amanpour responded, “he was amazingly perspicacious when this Constitution was signed.” Some viewers might want to roll their eyes in response to Amanpour’s use of such “elite” language, while others might appreciate that she doesn’t dumb down her thoughts for television. Either way, what was truly peculiar was the on-screen graphic. Were producers worried that the word would fly so far over their audience’s head that they needed to intervene as a public service? And if so, why not define “vat” and “Madeira wine” while you’re at it? Or is This Week now like Pop-Up Video with explanatory details and interesting facts popping up to complement what’s happening on screen?

One possibility is that Amanpour was quoting her guest’s own language from something previously written, yet if that was the case, shouldn’t the graphic have shown the quote rather simply provide Webster’s dictionary definition for one word? Yet my preferred, and admittedly less probable theory, is that someone on the This Week staff humorously thinks viewers need the equivalent of Cliff Notes to understand what Amanpour is talking about half the time. Either way, if Amanpour herself was truly perspicacious, she might avoid using such fancy language so that viewers in the future don’t mistake her show for a Rosetta Stone class teaching the English language.