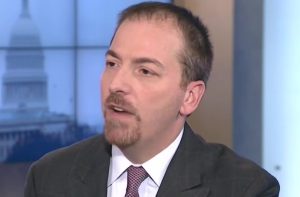 MSNBC and NBC News anchor Chuck Todd ripped the Donald Trump campaign, the Hillary Clinton campaign, and even the media Friday in the wake of the public bickering and finger-pointing that took place at a post-election seminar at Harvard University.

Todd noted that the Harvard conference had historically been cordial, and a place for incisive and illuminating election postmortems. Thursday, however, the event was marred with a shouting match between representatives of the two major campaigns and arguments between the media and political operatives.

“What we saw yesterday — and I’m not going to single out individuals– nobody has any humility yet. What has happened to grace and humility? Nobody has shown any of it. Not the campaigns, either side of it,” Todd lamented.

“Even those that represented the media didn’t show humility. My gosh, can somebody show humility here?” Todd begged. “It’s okay to admit some mistakes. It is okay to do that. And it seems right now at that conference everybody was looking to blame someone else. Nobody would look in the mirror.”

“These are supposed to be role models for young, up-and-coming political consultants and political journalists,” he concluded. “I’m sorry for a 20 or 21-year-old right now. I’m worried they will look at this and say, ‘I’m not going into this business, I’m going somewhere else. This is an s-show.’”