Chuck Todd: Why Is What TMZ Does Legal, But What Rupert Murdoch Does Illegal? 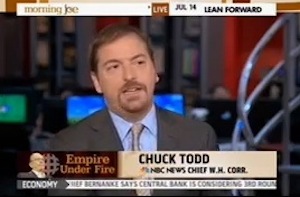 During an appearance on MSNBC’s Morning Joe today, NBC’s Chuck Todd offered an interesting take on the News of the World phone hacking scandal and the possible implications it has for certain media outlets on this side of the pond. Will similar publications in the States, he wondered, face the same sort of scrutiny as News Corp. head Rupert Murdoch‘s NOTW has?

What has Murdoch done that TMZ hasn’t done and why does what TMZ does, is legal, but what Rupert Murdoch does, it is illegal? What I’m saying is, is this going to — Would this be the beginning of the end of what – basically the horrendous nature of TMZ, National Enquirer, the road that they went down in our world does that put them, does that maybe put them in a place that – more vile, reviled than they are?

NY Mag‘s John Heilemann, also on the panel this morning, brought up the point that News of the World‘s influence beyond entertainment and gossip and into harder media and politics is unique, adding that you’ll never see a TMZ editor go on to become the White House Press Secretary, making reference to Andrew Coulson, the former NOTW editor turned former Communications Director for David Cameron.

The really huge difference between America and Britain is this, that the tightness of the establishment in Britain is just — it’s just such a different thing. I lived and worked in London for a number of years and people here can’t really get their head around what a small, incestuous world it is. Here you’ve got a country, a much smaller country, where there’s one real city where most of the people who run the country politically, in law enforcement, in media, they all went to one of two colleges and everybody knows each other. So in this case, the complicity of the establishment, the political establishment, the journalistic establishment, the law enforcement establishment, how they were all, in one way or another, in on this is in some ways the bigger story, an even bigger story than Murdoch himself. It was the culture that created this entire environment.