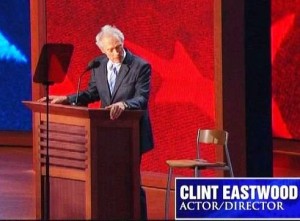 Thursday night, the Republican National Convention’s much-anticipated mystery guest delivered what will probably become one of the most memorable convention speeches ever. Legendary Hollywood actor and director Clint Eastwood hit the stage running, self-assuredly winging it through a bizarre speech that included a conversation with an empty chair that was supposed to be President Obama, and perhaps the worst slogan ever for a candidate (and a party) fighting an out-of-touch rich guy image.

After a shout-out to fellow conservative thespian Jon Voight, Mr. Eastwood motioned at an empty chair next to him, and set up his speech’s recurring bit. “I have Mr. Obama sitting here, and I was just going to ask him a couple of questions.”

What followed was a series of malformed riffs on the prison at Guantanamo Bay (“Well, why close that? We spent so much money on it…”), the Iraq War (“I know you were against the war in Iraq, and that’s okay…”), and the war in Afghanistan, which he seemed to take a shot at the Bush administration for. “We didn’t check with the Russians to see how they did there for the ten years. But we did it,” he said.

Whenever his train of thought seemed to wander a bit too far, Clint would turn to the empty chair as if the invisible President Obama was interrupting him. “What? What do you want me to tell Mr. Romney to do?” he said, awaiting the imaginary response. “I can’t tell him to do that. He can’t do that to himself,” he added, to uproarious laughter from the crowd. “You’re getting as bad as Biden.”

It was a strange speech, to be sure, punctuated by a huge applause line that Republicans will eat up, but which might not play so well with down-on-their-luck working class independents: “We own this country!”

As a political speech, Eastwood’s address was a hot mess, but as performance art, it was riveting, and while the empty chair bit came off as disrespectful in the beginning, Clint and the chair had better chemistry than the ticket they were shilling for.

MSNBC’s Rachel Maddow gave a comically stunned reaction to the speech, but anyone who has watched Eastwood over the years understands what went down. Clint Eastwood has a casual gravity that makes him invincible in interviews, and as a consequence, his often offbeat wit can miss as often as it hits without ruffling him a bit. It was a lousy speech, but one hell of a show.