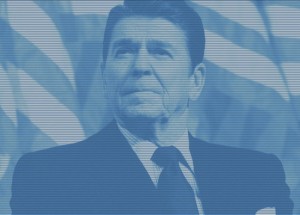 Earlier this week when the Republicans announced a mystery speaker for the final night of the convention, some people joked that it would be a hologram of Ronald Reagan akin to the surprise Tupac hologram that took Coachella by storm. Well, it turns out that a hologram Reagan actually exists, it was going to make an appearance right outside the convention this week, but the RNC asked the makers to delay its because they didn’t want it to “overshadow” Mitt Romney‘s speech.

The Reagan hologram was not actually going to appear on stage, but outside the convention, in order to stay out of the week’s politics and to promote Congress’ JOBS Act. One of the people behind the hologram explained why its debut was delayed.

Reynolds says he discussed the idea with a number of Republican activists who asked him to delay the project out of concern it would overshadow Mitt Romney’s acceptance speech.

“At the time he hadn’t chosen Paul Ryan, so I think they were a little worried about his energy,” Reynolds said. “Even in a hologram form I think Reagan’s going to beat a lot of people in terms of communicating.”

Reynolds said another reason he delayed the unveiling was that he didn’t want the hologram to be used for partisan purposes.

“We were careful because the JOBS Act was a bipartisan bill and we didn’t want to seem like we were favoring Republicans,” he said.

The official unveiling of Holo-Reagan will be either later this year or early 2013.