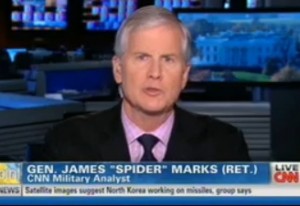 To call the Gen. David Petraeus/Paula Broadwell/Gen. John Allen/Jill Kelley/shirtless FBI horndog saga “surreal” is, at this point, an understatement, but as long as we’ve got nothing else to talk about, it’s worth cataloging the ridiculous cable news moments it continues to spawn, like the moment that Fox News was able to break the “news” that ISAF commander Gen. John Allen‘s emails to Jill Kelley had been upgraded from “inappropriate” to “flirtatious,” because until that very moment, the world was under the impression that Allen must have told Kelley to use a dinner fork on her salad.

Over on CNN this morning, Retired U.S. Army Major General and CNN military analyst James “Spider” Marks reacted somberly to the news that Allen may have used the term “sweetheart” in emails to Kelley.

The story so far: On Friday, CIA Director Gen. David Petraeus resigned over an affair with biographer Paula Broadwell, it was revealed that an FBI agent allegedly sent shirtless photos of himself to Jill Kelley, the woman who started the investigation of Petraeus because she had received “threatening” emails from Broadwell (that FBI guy also called Rep. Eric Cantor and told him about the whole thing a few weeks ago, and Cantor kept his mouth shut about it). Marine Gen. John Allen, the top U.S. commander in Afghanistan, is also now under investigation for alleged “inappropriate” emails to Jill Kelley.

On Wednesday morning’s Starting Point, host Soledad O’Brien asked Gen. James “Spider” Marks to weigh in on one source’s report, to CBS News, that “in some of the emails, Kelley would say things like, ‘saw you on television and you were terrific,’ and Allen would write back with ‘thanks, sweetheart.'”

“Is that still considered to be inappropriate in the military?” O’Brien asked Gen. Marks.

“From knowing John Allen’s reputation, i would say it’s innocuous,” Marks replied, “but you don’t call someone sweetheart in a form that lasts forever, which an e-mail is, unless it’s your daughter, mother or wife. I can’t imagine doing that. Those that know him quite simply would say this is behavior that was practiced and it’s not flirtatious.”

CNN contributor Will Cain read my mind when he asked why anyone should give a dog fart in an elevator about any of this. That’s not a direct quote. But what’s really ridiculous about this is the credulity with which Soledad and Spider treat this idea (from “a senior US official close to Gen. Allen”) that the FBI and the Pentagon are conducting an exhaustive investigation into 30,000 pages of documents because a guy might have said “sweetheart” in an email.That idea is even more ridiculous than Marks’ contention that you just don’t go around dropping the s-bomb.

I swear to God, if that turns out to be true, I will demand mass firings at the FBI and the Pentagon with every ounce of virtual ink I can muster. In fact, I’m having a hard time imagining what could be in those 30,000 pages that justifies any of this, other than the fact that Gen. Allen is in charge of the Afghan War, and is sending 30,000 emails to the fake Ambassador of Tampa. If someone wants to fire him for that, have at it, sweetheart!

When Soledad O’brien brought the discussion back around to Jill Kelley, Gen. Marks did go on to level a fairly bold charge. “I want to hear about Jill Kelley,” Soledad said. “Maybe you don’t care, but someone running around calling herself honorary consul, and has diplomatic plates, what’s that all about?”

“That’s a camp follower,” Marks replied, and if you’re not familiar with that term, think “groupie,” in every sense of the word. “Every community has these folks,” he continued, adding “Clearly she’s in a very prominent position, with a lot of stars around. and she’s infatuated by the stars. Those gentlemen need to not flatter themselves. She’s attracted to the stars, not them.”

As always, it is completely awesome that CNN has a military analyst named “Spider,” and in this case, it gives me a great idea for a name for this clusterf*ck of a scandal: The Human Centipede.