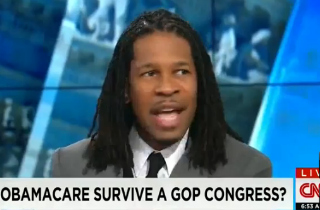 CNN contributor LZ Granderson had a unique take on the outrage over Jonathan Gruber‘s Obamacare comments: Where was that same outrage when President George W. Bush misled voters to get Medicare Part D passed?

Video emerged last week of Gruber saying, in 2013, that President Barack Obama’s signature health care law, the Affordable Care Act, only passed because of a “lack of transparency” along with “the stupidity of the American voter.” Gruber was a paid consultant who assisted in the writing and defense of the 2010 law. As soon as the infamous video made the rounds, he catapulted to national headlines, with the White House distancing itself from his comments.

During a heated CNN Sunday panel discussion on how to reform health care, liberal commentator Granderson asked his conservative co-panelists S.E. Cupp and Mercedes Schlapp: “Where was all this investigation ten years ago when Bush had his health care reform?”

Miffed by that suggestion, both Cupp and Schlapp attempted to interrupt, but Granderson pressed on:

This is important because some of the same voices who are now going after the Affordable Care Act were the same voices who were silent when Bush lied to the American people how much it was going to cost on Schedule D for Medicare…. You’re saying that the American people are so upset about this, but even when the Democrats tried to introduce a bill to repeal that law [Medicare Part D], the Republicans still fought that in 2007. Let’s not pretend this isn’t partisan politics.