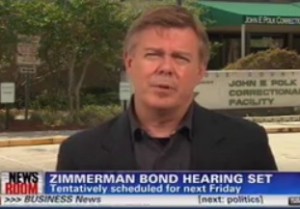 If you watch enough cable news, you stumble across the various pieces that will end up as that night’s episode of The Daily Show. On CNN Newsroom this afternoon, reporter Marty Savidge provided what will surely be a part of tonight’s “ZimDecision 2012” coverage, in the form of a way-too-detailed report on Trayvon Martin shooter George Zimmerman‘s doings at the John E. Polk Correctional Facility. Given the symbolism of Skittles in this story, though, the fact that Zimmerman stocked up on root beer barrels and Jolly Ranchers is oddly poignant.

Savidge reports that George Zimmerman is housed in a 67 square foot cell. “It is designed to hold two people,” he says. “It’s got two beds, but there’s only one person in it, and that’s, of course, George Zimmerman.”

He also reveals that Zimmerman is on a Florida retiree’s meal schedule, with breakfast at 4:30 am, lunch at 10:30, and dinner at four. Prisoners are served about 3,000 calories a day, and Zimmerman gets to exercise 3 hours per week.

“We also know that beyond that he’s had some access to the commissary, and he did stock up on some things,” Savidge continued, “including crossword puzzles, playing cards, popcorn, chips, snacks, in other words. Root beer barrels and Jolly Ranchers. He spent $79.84. Apparently he thinks he’s going to be there awhile.”

That last bit elicited a slight smile from anchor Gary Tuchman. “That’s a lot of detail there,” he said.

It’s fashionable for satirical fundits like Jon Stewart to bash the media over their gang-tackle style of covering the story of the moment, but in the case of the Trayvon Martin story, the mainstream media’s participation has been a net positive, in my view. All of the people who started bleating about a “rush to judgment” in recent weeks are like the guy who shows up late to a fire, and thinks the other firemen started it. Trayvon Martin was killed on Feb. 26, and in the weeks following his death, it looked like “justice” for him was going to consist of a ruling, by police, that the 17 year-old and his Skittles posed a deadly threat to George Zimmerman.

Thanks to the tireless efforts of Trayvon Martin’s family, the national media began to notice, and cover, the story on about March 13. That media scrutiny and pressure undoubtedly had an effect on the police, who had up until then refused to release the 911 tapes. Once they were released at the end of that week, the coverage went into overdrive, and eventually, the conservative media noticed.

There have been good and bad things about the coverage of this story, but without it, Trayvon Martin’s family, and the late teenager himself, probably wouldn’t have the shot at a measure of justice, which they now do. George Zimmerman has been charged, and will have his day in court.

That is not to say that the media should shrink away and just “let the whole thing play out.” What finger-waggers like Jon Stewart, and those who confuse the judicial standard of “presumption of innocence” with the mission of journalism to inform and contextualize, fail to acknowledge is that the media acted as an important check on an indifferent justice system. Now that Zimmerman has been charged, it will continue to do so, to ensure that whatever happens to Zimmerman and Trayvon Martin, all involved know the world is watching.

But even the seemingly silly detail that George Zimmerman is stocking up on candy has value, if only as a bitterly poetic reminder of the things that make us human.