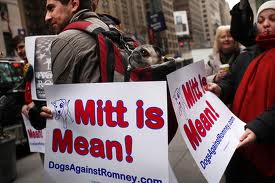 Remember Seamus the dog? Of course you do. Because tying a dog to the roof of a car isn’t novel enough, the Romneys are giving more fodder to Animal Lovers Against Romney/Dogs Against Romney crowd. The fundraising dinner for Ann Romney‘s birthday is going to be hosted by Frederick Malek III. Who once got arrested for killing and barbecuing a dog.

As Jezebel notes, Malek has had a long career in politics, including working for Presidents Richard Nixon and George H. W. Bush. He’s also the former National Finance Committee co-chair for John McCain’s 2008 presidential campaign, and former President of Marriott Hotels and Northwest Airlines. Quite a resume, yes.

Less impressive is the incident when, at the age of 22, Malek and four others raised the bar for Stupidest Things Done While Drunk. They were arrested when police found they had ” killed, skinned, gutted and barbecued” a dog on a spit. Yes, they actually found the dog on the spit. In 2006, the Washington Post told the story:

On a Friday in August 1959, five men in their twenties were arrested about 2 a.m. and held in the county jail all day after sheriff’s deputies found a blood-spattered, unoccupied car about 1:15 a.m. at the entrance to Vicary’s Park on Kickapoo Creek Road near Peoria, Ill.

Joined by Sheriff Harry P. Backes, two deputies had found two men walking toward the park entrance; the two men told the deputies that they had struck a dog and were going to bury it.

Further investigation revealed three others hiding in some weeds, the sheriff said. Because the men’s car was saturated with blood and they gave conflicting stories at the time of their arrest, Sheriff Backes thought there might have been a connection between the dog incident and a strong-arm robbery earlier in the evening.

After checking the blood-spattered pants of one of the men at the state crime laboratory in Springfield, it was determined that the stains were animal and not human blood. Backes said the men then changed their story and said they had “caught a dog and were barbecuing it.”

Police then found the skinned animal on a spit in the park. The insides of the dog had been removed, and a bottle of liquor was found on a nearby park table. Backes said the men told him they had been drinking earlier in the evening at a West Bluff tavern.

One of the men arrested in the incident, in which a dog was killed, skinned, gutted and barbecued on a spit, was Frederick V. Malek, 22, of Berwyn, Ill.

Malek later “said he didn’t know why O’Meara had killed the dog, that he was not a participant and that he was in no position to stop it.” The animal cruelty charges were later dropped. Malek went on to serve under Nixon, allegedly helping the former president spot Jews in the Bureau of Labor Statistics.

The more you know.