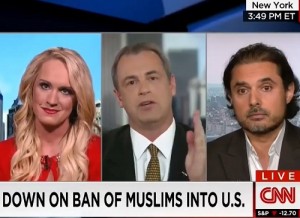 A CNN panel discussing the possible negative consequences of Republican presidential candidate Donald Trump‘s proposed Muslim ban for American Muslims devolved into a shouting match when one of the guests blamed Muslim terrorist acts like the San Bernardino shooting on American gun culture.

That’s when the New York University lecturer made his second point.

Needless to say, neither Hughes nor Schlichter were at all pleased with Kundnani’s line of argument.

“If every person in that room in California had had a gun on their ankle, I guarantee you they would not have been dead at this point. That’s the gun problem, and you have spun that so much,” said Hughes. “This is why we don’t trust Muslims in this country, because they lie like you just did.”

When CNN anchor Poppy Harlow tried to call Hughes out for grouping all Muslims together with her “we don’t trust” line, the Trump surrogate doubled-down on her previous comments.

“They are why they are distrusted. That’s why we distrust them! If they would be more open… Open up your clerics. Open up your mosques. Let’s see what you’re teaching these folk,” said Hughes. “You want to actually help your community? Turn in the bad ones.”