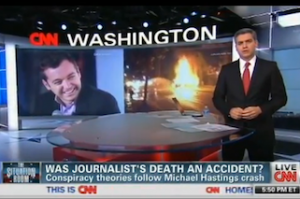 The tragic death of 33-year-old Rolling Stone and BuzzFeed reporter Michael Hastings has been provoking conspiracy theories ever since WikiLeaks indicated that he had reached out to them about being targeted by the FBI hours before he was in a fatal car accident. The FBI has claimed they were not investigating Hastings and the LAPD has ruled out foul play, but that hasn’t stopped the speculation, as this Thursday afternoon report from CNN revealed.

CNN’s Casey Wian offered some background to viewers about Hastings, from his career-making profile that ultimately ended General Stanley McChrystal‘s career to controversial comments he made to Piers Morgan about General David Petraeus‘ affairs. Wian speculated that it was Hastings’ “penchant for unvarnished criticism of military authorities” that has led people to question to true cause of his death.

“Even at this make-shift memorial,” Wian said, standing near the spot in Los Angeles where the car wreck occurred, “there are questions about Hastings’ death.” He read a card left at the scene reading, “I pray your death was an accident and not purposely done by those who don’t like you.” Wian added that the fact that the car’s transmission was found far away from the car have led some to believe “the vehicle could have exploded before impact.”

Hastings’ final article for BuzzFeed was titled “Why Democrats Love To Spy On Americans,” a fact that Wian said will “only provide more fodder for those who believe something more sinister than excess speed was at fault for his death.”