CNN Reporter On Obama’s Second Term Agenda: ‘There Is Not Anything Significantly New In Here’
video

CNN Reporter On Obama’s Second Term Agenda: ‘There Is Not Anything Significantly New In Here’ 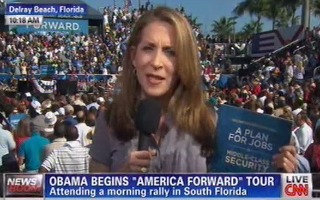 On Tuesday, CNN reporter Jessica Yellin reviewed what she learned after reading a 20-page booklet released by President Barack Obama’s campaign outlining his policy goals for a second term. Yellin said that, after reading the proposal, she said “there’s not anything significantly new in here.”

RELATED: Obama Releases Agenda, Miscalculates That The Press Would Tout It While He Campaigns On ‘Romnesia’

CNN anchor Carol Costello said that, prior to the release of this booklet, the president faced criticism from both his supporters and opponents who said that Obama had not yet sufficiently outlined his goals for a second term. “I’m just wondering why it took him till fourteen days before the election to put a plan out,” Costello asked.

“Well, I wouldn’t put it that way because he has put this out before. He’s just never put it out in a booklet like this,” Yellin said.

We heard these same details at the Democratic convention. We’ve heard them from his mouth on the campaign stump for days and months and weeks. And so my point is there’s not anything significantly new in here. It’s just all compiled in a nice booklet now. So we get the point that there is something, but you can still critique it for lacking details about will he pursue immigration reform – what specifically would the tax reform plan look like drilling down into the details.