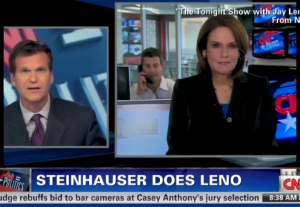 NBC’s late night comic Jay Leno took on CNN’s Paul Steinhauser on the Tonight Show the other night. What? Who is CNN’s Paul Steinhauser, you ask? Geez. What kind of political geek are you? Steinhauser’s CNN’s deputy political director based in the DC bureau, and he appears on camera during the day, and often in the background when anchors like Wolf Blitzer are doing liveshots from the DC bureau. Leno aired a funny clip stringing together a series of these clips, and in each one, as soon as the liveshot begins, Steinhauser picks up his phone–to Leno, clearly faking importance with a mock three second phone call.

“There’s this guy on CNN, I see him every day and every time the camera’s on him, he pretends to be on the phone. This is annoying to me,” says Leno, setting up the clip. “This is stupid! I’m not falling for it!”

So what’s the real story? In an interview with CNN’s T. J. Holmes, Steinhauser insists the calls are real. “I’m a popular guy here at CNN. People call me. People call me all the time.”

What about the strangely short duration of those calls? Holmes asks, “who has a three second call, Paul?” And Steinhauser finally comes clean that yes, many of those calls are people buzzing his desk to say, “hey, you’re on TV” and he says yes, and hangs up. At least, that’s the official story.