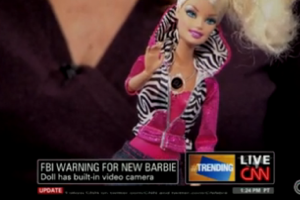 Finding a classic like Barbie in the news during the holiday season is no surprise, though at the culmination of a year that brought us new Wikileaks revelations, “Put Him in Bucca,” and James O’Keefe‘s “Palace of Pleasure,” it’s especially apt that this year’s trendy doll comes with an air of intrigue. Meet “Video Girl Barbie,” a doll with a hidden camera in her chest that may pose a threat to children, and doubles as a weapon of espionage.

CNN has highlighted an as-yet-unrealized threat with Video Girl Barbie (an Orwellian toy if there every was one)– that ill-minded folk use her to videotape private activities. The warning was released earlier this year by the FBI, to which Mattel replied that their toys are made with the best interests of children in mind and they had not heard of any incidents so far. The incidents the FBI had in mind, it seems, are that the doll may pose a threat to children as pedophiles can use it to secretly record the activities of children. On the other hand, as resident tech whiz Derek Dodge did, Video Girl Barbie also carries the threat of CNN reporters using it to secretly record the activities of people confronted with Derek Dodge playing with a Barbie doll.

About half of those targeted in and around the CNN offices had no idea the doll had a video camera, making their reactions are they stared directly into her camera lens all the more comical/creepy. The report via CNN below: