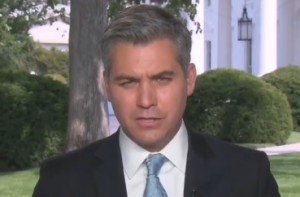 “Well, [Obama] can get testy at times, and clearly this question got under his skin,” Acosta said when asked about the exchange. “And I don’t think slamming reporters will solve any problems for the president. “

He continued that the president’s response “clearly shows that there’s a weakness in this deal in the fact he was not able to secure the release of those Americans being detained in Iran. And it’s going to continue to be a pressure point for this president for his detractors up on Capitol Hill.”

Acosta noted that Obama took the unusual step of lengthening the press conference to answer as many criticisms about the deal as possible. “He was really relishing the opportunity to fire back at his critics. You could tell a lot of this has been welling up in him for some time, and I think that pressure valve was released when Major asked that question.”

“I don’t think it was an unfair question, by the way,” he finished. “I think it was on a very important topic, and the president chose to use that opportunity to slam Major. But really, it’s not going to put that issue to rest…”