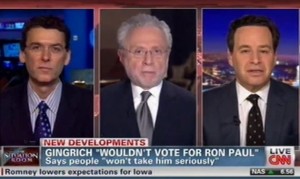 There was a lot to unpack in Wolf Blitzer‘s interview with GOP presidential contender Newt Gingrich, but one thing that stood out was a panel discussion that Blitzer conducted following a clip of Gingrich’s attack on Rep. Ron Paul over his newsletters, among other things. The ostensibly objective Blitzer said he thought “it took guts” for Gingrich to come out against Paul so strongly, David Frum accused Paul of racism, and panelist Jonathan Prince said Paul was “racist by design.”

However you feel about the Ron Paul newsletter controversy, this was a remarkable several minutes of television on a network that poses itself as the straight-shooting last bastion of straight news on cable. During the interview, Gingrich blasted Ron Paul over the decades-old newsletters, and Blitzer kinda just let him. He failed to correct Gingrich when he said Paul “still hasn’t disowned” the newsletters, and again when Gingrich said Paul “wrote in his newsletter that the world trade center bombing in 1993 might have been a CIA plot,” which Ron Paul denies.

More glaringly, Blitzer never asks Gingrich to explain the fact that just this morning, his own campaign denied that Gingrich had written a 2006 newsletter praising Romneycare. Blitzer obviously knew about that newsletter because he asked about it elsewhere in the interview, but he never called Gingrich on the denial.

Then, in a panel discussion following the clip, former Bush speechwriter David Frum and Democratic strategist Jonathan Prince tore into Ron Paul with varying degrees of glee. Frum launched a salvo of whoppers by saying that Paul wouldn’t get the nomination because “the Republican Party is a party of strong national defense. It is an antiracist party. A party of inclusion. It’s a party that does stand for decent social safety net…”

Let’s forget, for a moment, Newt Gingrich’s own history of race-baiting (not an isolated case in Gingrich’s party), or the GOP’s (and Gingrich’s) funny ideas about inclusion, or their attempts to destroy social safety nets like Medicare and Social Security. Throughout this, and Prince’s more focused accusation that Ron Paul “was racist by design,” with “malice and knowledge aforethought,” Blitzer never steps in to say something like, “In fairness to Ron Paul, he denies writing those newsletters, and has been apologizing for them for years.”

You might not expect that kind of refereeing on a more opinion-oriented show like some of MSNBC’s or Fox News’ primetime shows, but given the heft of these attacks, Blitzer seemed remiss. That impression is only magnified by his characterization of Gingrich’s attacks. “It took guts, I think you’ll agree,” Blitzer told his panelists, “for Newt Gingrich to come out as strongly and as adamantly against Ron Paul as he just did.”

I don’t know the truth about the newsletter controversy. Ron Paul has consistently expressed regret over what he says was a mistake, and in the years I’ve been covering him, nothing I’ve seen or heard from him would lead me to believe that the ideas in those newsletters reflect his beliefs. Having said that, part of making up for a regrettable mistake is facing the music for as long as it plays. If people still have questions about it, Paul owes them answers, just as surely as he is owed the chance to give those answers. It is a fair issue to discuss, but it isn’t fair to discuss it without noting Paul’s longstanding defense.

Here’s the clip, from CNN’s The Situation Room: