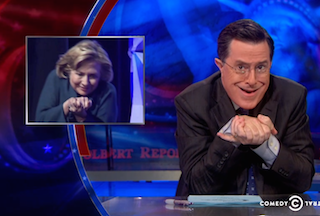 Stephen Colbert returned from a week-long vacation last night and the first thing he wanted to talk about were all those Hillary Clinton conspiracy theories that have been floating around lately. The host began with the suspicions that Chelsea Clinton’s pregnancy was a bit too “planned,” before moving on to the even more sinister “shoe truther” scandal, in which the former secretary of state allegedly “staged” her own attack.

Colbert began with the baby news, congratulating Hillary for “such a shrewd political move.” On accusations that Chelsea Clinton’s pregnancy was “planned,” Colbert added, “we know only the most devious people would plan a pregnancy.”

But, as Colbert explained, the pregnancy bombshell wasn’t the biggest Hillary Clinton-related scandal of the week. In the second-ever installment of his series “Stephen Colbert’s Batshit Serious,” the host embraced the cause of the shoe truthers or “shoe-thers.”

Colbert broke down the conspiracy theorists best arguments, including one from Herman Cain’s website that asked why Clinton did not duck until after the shoe had flown past her. “As anyone who’s thrown a shoe at a 66-year-old knows, they react with cobra speed,” he said. As for the suggestion that Clinton was trying to look presidential like George W. Bush, he added, “the only way she could have seemed more like a leader was if she choked on a pretzel while falling off a Segway.”