Colbert Hilariously Proves That ‘Hatchet-Wielding Homeless Hitchhikers Are People Too’ 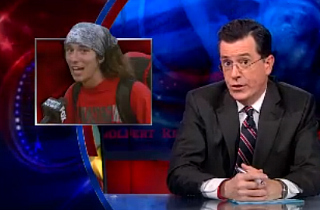 Last night’s Colbert Report hilariously took on the now-famous homeless hitchhiker Kai, whom our very own Meenal Vamburkar brought to fame via this Mediaite post. Colbert said that because of Kai, we now know that hatchet-wielding hitchhikers are people too.

“If somebody cuts me off in traffic, what do I do?” Colbert asked, alluding to the Kai story. “Do I ram them? Or do I [flip the middle fingers]? I have to admit I am guilty of highway prejudice of my own: against axe-wielding hitchhikers.”

“I can’t tell you,” he continued, “how many times I’ve rolled up my windows and sped past a hobo sharpening a hatchet. Not even considered picking him up. But I have come to realize the error of my ways after seeing this news story about a young man named Kai. He showed me that axe-wielding hitchhikers are people too — people who sometimes stop madmen running loose on California’s freeways.”

As readers may recall from this “must-see” video, Kai got into a car with a man who then declared himself to be Jesus and proceeded to ram into a nearby truck for no real reason other than to create havoc. The Jesus driver apparently then started ranting and raving in the streets, bear-hugging random people and “beating the heck out of them.”

“Like a guy that big can snap a woman’s neck like a pencil stick,” Kai explained why he sprung into action.. “So I fucking ran up behind him with a hatchet — smash, smash, suh-mash!”

“Boy, we sure are glad that homeless hitchhiker was carrying a hatchet,” Colbert imagined the survivors thinking.

Colbert also said he would definitely want Kai as his co-pilot, because he knows exactly what to say, since he told the news station: “I’m like, ‘Bro, if you’re fuckin’ Jesus Christ, I’ll be the anti-Christ, man, like fuck that shit.”

“So nation, I encourage you to pick up axe-wielding homeless hitchhikers whenever you see them,” Colbert concluded.