Colbert Takes On NRA’s Wayne LaPierre: ‘You, Sir, Are F**ked In The Head’
video

Colbert Takes On NRA’s Wayne LaPierre: ‘You, Sir, Are F**ked In The Head’

Colbert Takes On NRA's Wayne LaPierre: 'You, Sir, Are F**ked In The Head' 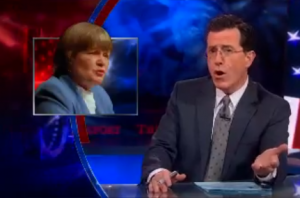 With the gun control discussion gaining traction since the school shooting in Newtown, Conn., Stephen Colbert, too, broached the subject on his show Wednesday night. And showed us the discrimination involved in the issue.

“We freedom-loving gun lovers are totally defenseless,” Colbert asserted. “Other than, you know, the guns.”

He continued on in disbelief that now our Dear Leader President Obama is coming for our guns, with Joe Biden tasked to do the job.

But fear not, he comforted. There are rational voices in this conversation. Namely, NRA executive Wayne LaPierre, who helpfully suggested equipping schools with armed officers. Colbert concurred, noting that it could even be worked into the prom theme. Like, “Enchantment Under the Siege,” for example.

More importantly, however, former NRA President Marion Hammer found the real issue with gun control. Blaming the real victim: guns. “Banning people and things because of they way they look went out a long time ago, but here they are again,” she said. “The color of a gun, the way it looks.”

“So sad. Banning a gun based on its color,” Colbert remarked. “I’m sure if Dr. King were alive, he’d be standing with the NRA.”

After all, it’s “a little too convenient to be blaming guns for gun violence.”

“I agree with Wayne LaPierre,” Colbert said, playing a clip of LaPierre himself. “You, sir, are fucked in the head.”