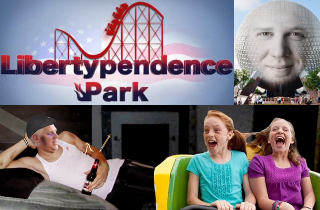 Jon Stewart may have gone after Glenn Beck‘s proposed “Independence, USA” freedom-loving haven last night, but he apparently missed the comedy boat by a week.

Another comedian, Brian Sack, already treated Beck’s proposal a severe mocking… and he did it on Beck’s own BlazeTV network.

Dubbing Beck’s planned town “Libertypendence Park,” Sack’s The B.S. of A. comedy show put together a fake advertisement for the real-life Galt’s Gulch, mocking the overall concept and Beck’s frequent use of buzzwords like “liberty,” “freedom,” and “independence.”

“Take an authentic steam train ride to Americaville,” the narrator says. “Step back in time to a vibrant re-creation of exactly the way early America might have been if it was the way we wished it were, way back when it wasn’t,” he continues over photoshopped sepia-tone images of a black male, a Native American in headdress, and a bearded frontiersman standing together, all smiles.

Travelers can visit “Non-Union Square,” featuring the “Hall of ?Good? Presidents,” where presidents say things “we wish they had said,” like “I’m Thomas Jefferson, and everyone should submachine guns!” The faux-park also features a roller coaster (“The Freedom Coaster at America Mountain”) where safety harnesses are optional — “Take that nanny state!” deadpans the narrator.

Non-thrill-seekers can go inside “Glenncot Center,” a giant Epcot-like building with Beck’s face transposed. “See what other countries look like in Glenn Beck’s mind,” the announcer entices.

And for food, you can travel to “Libertarian Island,” where food is cooked in an unregulated shack and served with a 254-oz. tub of soda “because no one is the boss of you but you!”

The whimsical “It Should Be A Smaller World!” theme ride teaches riders an important lesson, showing happy “children untainted by the damaging effects of unrestrained immigration.”

The park’s haunted mansion is dubbed “Soros Manor,” where riders are given a fright by the “ghoulish debt incurred by Democrats.” And a spinning ride allows thrill-seekers to relive Glenn’s “topsy-turvy years” (i.e., when he was an alcoholic).

No Glenn Beck-themed park would be complete with a bunker, and so Libertypendence Park includes a “life-like underground panic bunker” where families can “wait out the end-stages of the collapse of America.”

Sounds fun! Watch the full sketch below, via BlazeTV: