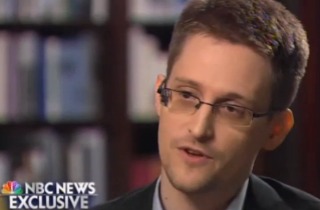 Williams has a tendency to use just a little-too-much hyperbole now and again. But upon watching an hour-long interview Wednesday night (the conversation was edited down from five hours, according to NBC), blindingly smart appears to apply to Mr. Snowden. And given his flawless performance in his first major interview with an American news network, it’s clear the United States government clearly has its hands full from a public relations perspective in proving Snowden is a just a rogue hacker with a chip on his shoulder.

Note: This column isn’t going to get into the debate of whether Snowden is a traitor or hero. This is Mediaite after all. It is safe to assume that discussion will evolve in the friendly comments section below, so feel free to make your opinion heard there. Instead, we’ll use this space to critique Snowden as an interviewee and how he may potentially be perceived by someone (outside the news-junkie bubble) watching at home.

One pet peeve of mine of anyone on television—and this flaw can easily be corrected—is the reflexive use of “you know”. It’s prevalent in cable news, and we’re not just talking guests and talking heads here, but anchors as well. That said and upon watching Snowden for the full hour, there wasn’t one you know. And in the words of the great John Bender (Judd Nelson) in The Breakfast Club, “Did…I…stutter?” In the case of Snowden—who doesn’t have anything remotely resembling media training or experience—he didn’t. Not even once.

What’s the big deal about that? It shows confidence and being comfortable in his convictions. Again, many Americans on the street couldn’t accurately describe what Snowden did, what he represents, and why they should care. An interview on the NBC mothership in prime time reaches a relatively huge audience, and one that normally doesn’t watch cable news or read political publications all that much. This makes Snowden a mystery to the masses. For many, the jury is still out on whether he is a patriot or a crook (most polls pre-interview show a 50/50 split).

More and more, American political discussion is based on performance. As we’ve seen, presidential debates are scored on who delivered the best zinger or who was the most animated. Policy position? Budget numbers? It all gets lost, all is forgotten two minutes afterward. To that end, Ed Snowden came across as a natural presenter, exceptionally prepared, astute, candid, and most importantly, human…a tough combination to pull off.

Part of what made this interview so compelling, of course, was Williams. In case you hadn’t heard, NBC News could use a few wins these days. The Today Show has permanently fallen to second place behind the ever-changing Good Morning America on ABC (which keeps losing male anchors and still manages to stay on top of the lucrative morning show race). NBC Nightly News—which once dominated for years—fell to ABC’s World News Tonight with Diane Sawyer in the recent May sweeps in the key demo. MSNBC continues to struggle while facing the usual PR difficulties. So when Williams was able to land Snowden, rest assured that breeze felt across Rockefeller Plaza was a big sigh of relief emanating from Deborah Turness’ (NBC News President) office.

And Williams delivered for the most part. Could he have probed deeper into Snowden’s surprising revelation that he served overseas undercover as a spy for the CIA? Of course. After all, President Obama characterized Snowden as a 29-year-old low-level hacker whom he wasn’t about to start scrambling jets for to find. Snowden’s revelation about his past government work—if true—directly contradicts how the President and others political heavyweights (such as Republican Peter King or Democratic Majority Leader Harry Reid) have tried to portray him. More information on this front is needed.

But while Snowden has almost looked more like a cyborg to this point—doing a headshot-only interview via Skype at SXSW, for example—the Williams interview brought out his human side. Life in Russia–according to Snowden—isn’t exactly romantic. He doesn’t agree with how the Russian government operates (a bold statement considering the protection Putin is currently offering). He misses his family. He says, “If I could go anywhere in the world, that place would be home.”

If you believe he’s a criminal, those types of statements likely solicit emotion of the negative variety. If you believe he’s the patriot he says he is, you feel sympathy. Either way, the viewer becomes invested in the story. There was even the small nugget on how Snowden fills his hours: “Right now I’m watching a show, The Wire, about surveillance. I’m really enjoying it — [though] the second season’s not that good.”

Either way, these types of answers aren’t what one would expect going into the interview. For that, Williams deserves kudos. As does learning more about Snowden’s background in the military (U.S. Army Special Forces) ten years ago as a teenager (where he broke both of his legs in training), how 9/11 inspired him to serve his country, or how he feels the government exploited the attacks to spy on the private lives of Americans and to go to war in Iraq.

There are still many questions around the veracity of Snowden’s claims. There are many around where he will ultimately end up as well. Will the U.S. strike a deal with him for his return? Will the Russians continue to protect him simply to mock the U.S. as we enter Cold War 2.0? Most importantly, is Snowden telling the truth about his motive in revealing all of this information about the way Big Brother does business?

Either way, the NBC interview was a big victory for Snowden on the PR front.

And a much-needed victory for NBC News and Brian Williams as well.