After every mass-shooting in recent years, perhaps most notably in the case of Sandy Hook, there inevitably arrives an alternative narrative that pushes back against the mainstream media’s telling of events. They are, without exception, woefully, offensively, and in all other ways, ridiculous. So it shouldn’t come as a surprise that there are now Elliot Rodger deniers out there, sojourners for truth who think that the killings were staged by the government, or the media, or Hollywood, or – to be honest, I really can’t figure out what it is they think because I watched a few of the videos and I no longer possess critical reasoning skills.

The truther videos were pushed into my feed by Exene Cervenka, singer for the formative Los Angeles punk band X, who’s been tweeting out a stream of paranoid nonsense since the killings over the weekend. As Radio.com points out, “Cervenka believes Rodger’s killing spree, along with the Sandy Hook Elementary shooting, were designed to force stricter gun control laws — ultimately leaving citizens defenseless against the government.”

Here’s a smattering of her sleuthing:

If you have a few minutes, and an iron-clad stomach, take a peak at the videos above. This is like a political-paranoiac version of the video from The Ring – if you watch it, ten minutes later you’re going to die of stupid. Apparently some glass was delivered to the store that was one of the crime scenes and that means… uh, they were preparing to…fix the window ahead of time? Hard to say. Another is just a guy waving his cursor around at a video of one of the victim’s father’s speaking and singing.

Anyone who’s followed Cervenka for a while now will recognize that this sort of conspiracy theorizing is nothing new. “always the same, the trolls call you mentally ill, crazy, say i’m sorry used to like you… OMG!!! get a new ROUTINE! it’s not working!!!!” she tweeted recently in response to push back from fans unhappy about watching her slide out into the deep end: 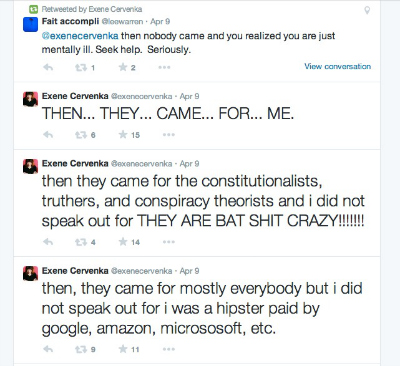 Sadly, this sort of descent into reactionary political ramblings isn’t all that uncommon for aging punk rockers. After a while you realize that the old tricks for shocking people don’t get the same attention anymore, and the only avenue left for being really offensive to mainstream sensibilities is a political 180.

Then again, if you listen to “Los Angeles”, one of X’s most popular songs, perhaps it doesn’t seem all that much of a change of pace after all: