Coulter and Hannity Tear Into Obama for ‘Openly Negotiating with Terrorists’ 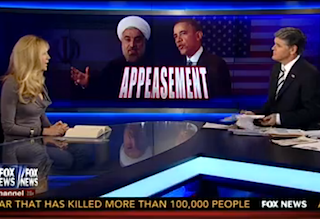 With a banner that read “APPEASEMENT” in all caps between photos of President Barack Obama and Iran’s Hassan Rouhani emblazoned across the screen, Ann Coulter joined Sean Hannity Monday night to discuss the deal diplomats made over the weekend to start scaling back Iran’s nuclear capabilities. Or as Hannity put it, “That’s right, President Obama is now openly negotiating with terrorists.”

After juxtaposing the president’s words on the deal directly with those of Neville Chamberlain from 1938, Hannity asked Coulter why Obama would “trust” a “state sponsor of terror.”

Coulter’s number one answer? “He’s a liberal.” She pointed to former President Bill Clinton’s deal with North Korea as a precedent. “We give them nuclear materials, $5 billion in aid and they give us a promise not to build nukes,” she said. “So they take it and go to work building nukes.”

“Democratic presidents go around creating crises in the world, and then Republican presidents have to deal with it,” Coulter said, with no sense of irony. “If you have no politics, but you just want America to be safer in the world, you have to vote Republican.”

When Hannity pointed out the irony of Israel and Saudi Arabia aligning together against Iran, Coulter added, “And we have Obama aligning with Iran against the rest of the world.”

Before the segment ended, Hannity gave his best shot at trying to get Coulter to name her preferred GOP candidate for 2016. While she wouldn’t say who she would support, she had it had to be a governor or senator with some practical experience. “No more congressmen, no more inspirational leaders,” she said. “I love Ben Carson, too, but it’s got to be a governor or a senator.”