Countdown Devotes 60% Of Show To Eric Massa, Snorkeling And Homophobia? 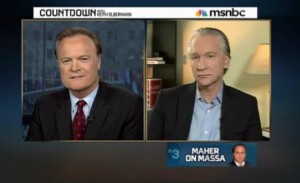 As the Eric Massa story continues to unfold, the media’s wall-to-wall coverage of it becomes thinner and thinner. On last night’s Countdown, fill-in host Lawrence O’Donnell spent 3 entire segments on the Massa story, alternately cracking wise about the Navy and obsessing over the sexual slang term “snorkeling.” Drew Grant points out the offensiveness of some of O’Donnell’s treatment, but the show was also guilty of the lesser crime of dullness.

Media overkill is nothing new, but spending 3 out of 5 segments on a week-old story takes this effect to 11. Still, the Massa story has enough comical elements to it that you might think it could sustain such prolonged attention. Throw in lightning-rod comic Bill Maher, and what could go wrong?

“Howard Fineman wasn’t feeling gay enough to talk about this?” What does that even mean? Fineman seemed to think it was pretty funny, the night before, when O’Donnell asked “Who has done more damage to the image of the Navy, Congressman Massa or the Village People?”

And is it really that tough to figure out what a sailor waking up to “to Massa undoing his pants trying to snorkel him” means? Sure, the term evokes what sounds like a painful curvature issue, but this is not The Davinci Code.

O’Donnell  and Maher just sort of wander around in the sophomoric,”icky gayness” of it all, and setting aside the offensiveness of it, the segment is just aimless. The overall impression is that the Navy is a big, gay office party, and Massa’s just the boss who got a little bit fresh.

Much funnier was the recap segment, the highlight of which is the Glenn Beck interview. I’m not a Beck fan, but he pulled off a series of hilarious slow-burns worthy of Jack Benny.

Lost in all of this, however, is the fact that there are big parts of this story that aren’t funny at all. The things that Massa is accused of are revolting abuses of authority. I have two sons of an age where someone like Massa could exert this kind of pressure, and you’d better believe I wouldn’t be laughing if someone tried to molest one of them as they slept. This isn’t a gay thing, it’s a predator thing.

While the absurdity of Massa’a public performances are undeniably funny, where is even an iota of outrage over what this guy is accused of doing? I haven’t seen it anywhere else, and I didn’t see it during last night’s Massa Opus. That is a disgrace.