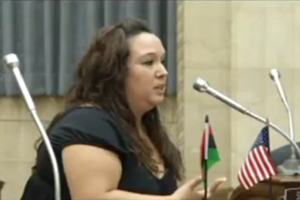 When going all out in opposition to something, it’s best to always have your facts straight. It’s a lesson that would have well served Wisconsin County Supervisor Peggy West, who has come out strong against the Arizona illegal immigration law claiming that it doesn’t make sense for Arizona to be so agitated about illegal immigration. It’s not Arizona is like “Texas, which is a state that is directly on the border with Mexico.”

West was commenting in support of a boycott of the state. Her main argument was that the law went to extreme measures to combat an issue that, it appears, she didn’t see as too much of a big deal:

“If this were Texas, which is a state that is directly on the border of Mexico, and they were calling for a measure like this, saying that they had a major issue with undocumented people flooding their borders, I would have to look twice at this. But this is a state that is a ways removed from the border, and it doesn’t make sense to me that when you Google this subject– if you put in Arizona SB 1070– that you see a picture of the governor of Arizona meeting with President Obama in May of 2010. If you have direct linkage to the President, there are already National Guard troops in Arizona.”

A fellow attendee of the meeting let West down gently, assuring her “that Arizona does, in fact, share a border with Mexico.” Meanwhile, the comments landed West a segment on America Live, where Megyn Kelly rolled out the floor map and quizzed Alan Colmes on what territory lay below her stilettos, firmly planted in the Grand Canyon State.

Video of West’s comments, followed by the America Live segment, below: