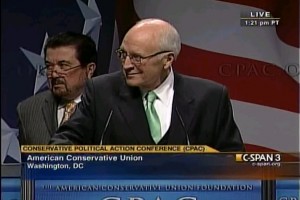 Things should have been nice and chummy at CPAC an hour ago. Dick Cheney strolled on stage to cheers and the inspirational tune of Tina Turner’s “Simply the Best” and got began to present the “Defender Of The Constitution” award to Donald Rumsfeld. However, as the chants of “USA! USA!” died down, a voice screaming “War criminal!” could be heard. And then, as Cheney continued to talk up his former colleague, a shouting match began between supporters of Ron Paul and the rest of the convention hall.

The Paul supporters eventually walked out in the middle of Rumsfeld’s speech as way of protest. Talking Points Memo managed to nab a quote from one of them:

“‘Uh, Defender of the Constitution?’ Justin Bradfield of Maryland scoffed when I caught up with him after he walked out of Rumsfeld’s speech. ‘Let’s see: he expanded the Defense Department more than pretty much any other defense secretary and he enforced the Patriot Act.’
‘[Speaking] as a libertarian, that’s not really the type of person who should be getting Defender of the Constitution,’ he added.”

So far, plenty has been written about the rift between classic GOP members and the Tea Party, but we shouldn’t forget about the old fashioned Libertarians. Somehow, all of these groups are going to have to come together to choose a leader. They’re going to have to put aside their ideological differences to choose someone who’s better than all the rest. Someone who’s better than anyone. Better than anyone that they’ve ever met. Someone who’s, to put it plainly, simply the best.

Check out the video from C-Span below: