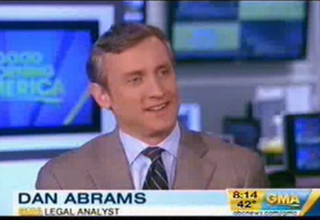 Online poker is under fire from the federal government, with three of the largest online gambling sites being shut down by the FBI earlier this week and potentially endangering the future of the business. ABC legal analyst (and Mediaite founder) Dan Abrams visited Good Morning America today to explain the rationale behind the shutdown and why, despite the major setback to the industry, online gambling might just become legal in the long-term.

While the websites were shut down based on a 2006 law banning online gambling, Abrams argued that this was merely the tip of the legal iceberg for these sites, who among their crimes also included wire fraud and money laundering, and they “hid their profits and… fooled the banks.” It was the entire package, he concludes, that brought the federal government in.

This does not mean that the possible legalization of online gambling is not hindered by the websites being shut down. “There was a movement before this happened towards legalizing online gambling,” Abrams explained, and the setback for that movement this week begs the question: “Is this going to push it towards making it illegal?” Ultimately, Abrams concludes that legalization will happen despite the current situation. Legalizing online gambling, given the myriad other laws the companies behind it broke in the process, is a tough sell now: “I think in the short term,” he explained, “it’s going to be very tough to legalize it. In the long term, it’s almost inevitable.”