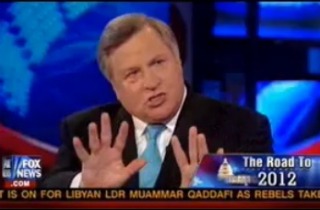 On Monday night’s Hannity, host Sean Hannity brought political commentator Dick Morris onto the show to discuss what the future night hold for revolution-rocked Libya… and how it reflects on President Barack Obama and his administration.

After referring to Obama’s speech on Libya, Morris placed blame for the “Arab Spring” and the recent burst of violence across Israel and into Egypt on “Barack Obama’s regime.” Then, talk turned to Libya specifically.

“A new constitution has been drawn up for Libya, too,” said Hannity. “Short term, they want Sharia Law as their governing body.”

Morris drew back on Obama’s speech for his response:

What’s underscoring Libya, which is why I think this speech he gave today declaring success, because Gaddafi is more or less out of power, I think is like Bush’s “Mission Accomplished.” Libya is the East versus the West. They’re practically two different countries. Rebels from the east, the regime from the west. It took 5300 U.S. sorties to dislodge Gaddafi. They are dug in. And they took their weapons home with them. They took their guns home with them. I believe you are going to have another Iraq there.

But is it really responsible, or accurate, to compare Libya to Iraq at the moment? At any rate, it certainly takes away any credit the Obama administration may have been given for wanting Muammar Gaddafi out of Libya — presumably, of course, so that democracy might flourish.

Take a look at the clip, courtesy of Fox News: