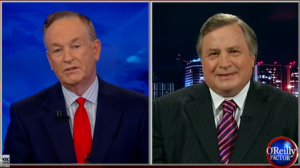 Bill O’Reilly warned that “there’s a war going on” between Fox News and The New York Times, which served as the backdrop for an interesting revelation from Dick Morris. Morris claimed he and other Fox News authors are being kicked off the Times bestseller list and reassigned to the separate, less prestigious list of “How To” books alongside cookbooks and marital aids, to which O’Reilly responded, “that’s wrong.”

Morris suggested that his book, “Revolt: How To Defeat Obama And Repeal His Socialist Programs,” along with books by Mike Huckabee and Frank Luntz have all been booted from the main bestseller list, which will impact the sales of their books since bookstores will not feature them as prominently. O’Reilly said of course these are political books, not “How To” books, but laughed when he realized that Morris’ book does have “how to” in the title. O’Reilly concluded, “I don’t like The New York Times and their shenanigans, because this is another example of not honest expositions.”

In other news, an interesting exchange took place between the two when O’Reilly joked that if Obama continues to wait on consensus from the world before acting in Libya then we’ll be waiting until 2030. Morris then attempted to suggest that the real metaphor for Libya is not Egypt, but rather Rwanda because there is “massive slaughter of people in the streets.” However, O’Reilly dismissed the comparison as not being fair and also challenged Morris on some of his other claims including that Obama has lost control with his reaction to the Japan crisis.