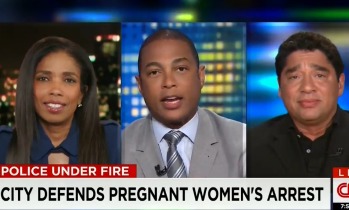 Newly-released footage of California police officers wrestling a pregnant woman to the ground after she refused to show identification has sparked another round of outrage over racial bias in law enforcement. Things got a bit heated Thursday evening when the story was debated by CNN’s Don Lemon and an ex-cop.

The backstory: A Barstow, Calif., officer’s body cam video shows him and a fellow cop taking down Charlena Michelle Cooks, eight months pregnant, after they arrived at the scene to deal with a complaint about her parking lot driving. The complainant told officers that Cooks had been driving erratically and punched her window during a dispute. The cops openly said there was no evidence of a crime, but proceeded to ask for Cooks’ identification — something which the ACLU says she can openly refuse to do in California. Shortly after she declined, the officers pounced. The resulting charges for “resisting arrest” were later dropped.

So how does the story have a racial element? Cooks is black, while her complainant is white. The officers did not ask the white woman to identify herself. And the local ACLU recently settled a case against the same police department for arresting two black men in a similar fashion.

“When speaking with the white woman, the officer actually tells her, ‘I don’t see a crime that has been committed here,’ so why even ask the black woman for her ID?” Lemon asked the former law enforcement official.

Stanton’s response: “Alright, let me tell you what’s disturbing to me, Don, first of all, labels: ‘White woman, black woman.’ By my metric, by my eyes, as a former South Bronx cop, and what I saw here, nothing to do with color.”

“Okay, that’s a bunch of crap,” Lemon fired back, “because I’ve been in similar situations where I have called police and the police go over to the white person and say, ‘What do you want,’ and the person says, ‘Oh, he called police,’ and, like, their whole world gets confused.”

“So, Don, your experience is indicative of every police interaction in America?” the officer asked.

“No, no, it’s not indicative, but yes, there’s some credence to that,” the host fired back, “Many times they will walk up to a scene and, depending on how they look, will act differently.”

Towards the end of the discussion, Lemon revealed how he would act if he were in Cooks’ situation: “Listen, I agree you should comply with the police officer, but if the law is you don’t have to, I’m not so sure I would want to, as well.”