Donald Trump on Oscars: ‘Great Night for Mexico’ — ‘As Usual’ in ‘This Country’
video

Donald Trump on Oscars: ‘Great Night for Mexico’ — ‘As Usual’ in ‘This Country’ 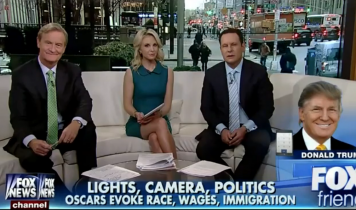 Oh, man, did you hear? Donald Trump didn’t like the Oscars last night. Whoa, right? He never has anything predictably terrible to say about anything he isn’t involved in, right? So unusual for that guy.

The real-estate-mogul-cum-movie-expert showed up, by phone, Monday morning on Fox & Friends to give his steaming hot take on just how bored he was during the 87th Academy Awards. Amazingly, he avoided suggesting he should host, produce, and perform at next year’s show to boost ratings.

“I thought it was terrible,” he told the couch-dwelling hosts.

“I thought a lot of the winning performances and a lot of the winners were surprise winners,” he also declared. Fact check time: Nope. Most of the big awards went exactly as expected, according to Vegas odds and prediction markets. (Wait. Why are we fact-checking Trump? Someone help us, please.)

Meanwhile, Elisabeth Hasselbeck did her obligatory mention of how American Sniper was “snubbed” and somehow lost Best Picture despite being the top-viewed of all the nominees (By that logic, Spider-Man 3 should’ve been an Oscar favorite in 2007). She then played a clip of “the lefties” going “full-throttle” with their views which included Best Picture winner Birdman‘s director Alejandro Iñárritu suggesting immigrants should be treated with compassion (also including the decidedly non-“lefty” joke that Snowden committed treason, but, hey, nuance).

Trump’s take: “It was a great night for Mexico, as usual — this country, you know, the whole thing is ridiculous.”

(Get it? Because Mexicans take our jobs and now our awards!)

“It was a great night for Mexico. This guy kept getting up and up and up. What’s he doing? He’s walking away with all the gold? Was it that good? I don’t hear that. It was a big night for them.”

They talked a little bit more about conservatives being snubbed or whatever, but let’s just end it here and cut to the video below, via Fox: