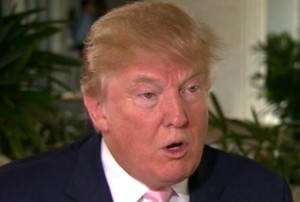 Presumptive Republican presidential nominee Donald Trump‘s controversy du jour is his offer of praise for late Iraqi dictator Saddam Hussein at a rally in North Carolina. Trump told the crowd that while Hussein “was a bad guy, really bad guy,” he added that Hussein “killed terrorists! He did that so good.”

Trump also called post-Saddam Iraq “the Harvard of terrorism,” and if all of this sounds a bit familiar to you, it should. Like the days-long kerfuffle over his refusal to disavow Ku Klux Klan icon David Duke, this episode is a rerun. Trump said a nearly identical thing to CNN’s Jake Tapper back in October:

TAPPER: But you also recently said that the Middle East would be better off with Gadhafi, Saddam Hussein and Assad in power. How does…

But we certainly have not gained anything with Gadhafi. And you look at what happened, I mean, look at Libya, look at Iraq. Iraq used to be no terrorists. He would kill the terrorists immediately. It was like — now it’s the Harvard of terrorism, Iraq.

If you look at Iraq from years ago — I’m not saying he was a nice guy. He was a horrible guy, but it was a lot better than it is right now. Right now, Iraq is a training ground for terrorists.

The argument Trump is trying to make is one that liberals often made against George W. Bush, that Hussein kept a lid on sectarian violence, but Hussein was, of course, a state sponsor of terrorism, not a terrorist-hunting hero.