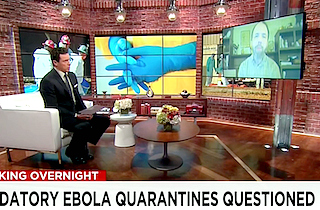 Sacra was successfully treated for ebola last month at the Nebraska Medical Center after returning from working with patients in Liberia. (His interview with CNN Monday morning was slightly more awkward than one he conducted on the Today Show, as anchor Chris Cuomo is Governor Cuomo’s brother.)

“These health care workers are coming back in through an airport and being asked what activities were you involved in in West Africa,” Sacra said. “That’s an honor system right there. They are being asked to self report their activities. …So you have to have a system that encourages more communication of better relationship between those health care workers and their local health authorities.”

“I think when you put in place a more burdensome quarantine, you are going to start having people not want to be quite so free about communicating the truth about what they were doing,” he continued. “So let’s appeal to the honor of these amazing self-sacrificing health care workers and let them have a role in monitoring their own condition, instead of doing it like a police state approach.”