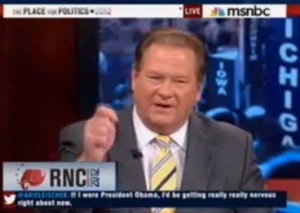 Republican presidential candidate Mitt Romney has been getting generally high marks (at least when it comes to style) for his acceptance speech on Thursday night at the Republican National Convention, even if it was overshadowed by a guy talking to an empty chair. However, MSNBC’s Ed Schultz singled out one particular line from the address as a “bone throw” to the racist Birther element in the party.

During MSNBC’s post-speech convention coverage, the firebreathing host of The Ed Show told his colleagues, “Here is another thing that jumped out at me. ‘When the world needs to do really good stuff, you need an American.'”

“That was the other line,” Schultz continued, “you know, we’ve got to do big stuff. We’ve got big problems. We don’t have an American. How else are we supposed to take that line? To imply that the guy who’s leading the country right now is not an American, ‘when the world needs to do really big stuff we need an American.’ I felt that was below the belt, and it was a dog whistle, whatever you want to call it, a bone throw to the birthers out there that ‘I’m not that far from you.'”

Convention co-host Rachel Maddow was in agreement. “Tt struck me as the same way,” she said, “especially coming on the heels of his birther joke from this past week.”

Here’s the actual quote from Romney’s speech, with some surrounding context: (transcript via email from the Romney Press Shop)

The soles of Neil Armstrong’s boots on the moon made permanent impressions on OUR souls and in our national psyche. Ann and I watched those steps together on her parent’s sofa. Like all Americans we went to bed that night knowing we lived in the greatest country in the history of the world.

Tonight that American flag is still there on the moon. And I don’t doubt for a second that Neil Armstrong’s spirit is still with us: that unique blend of optimism, humility and the utter confidence that when the world needs someone to do the really big stuff, you need an American.

That’s how I was brought up.