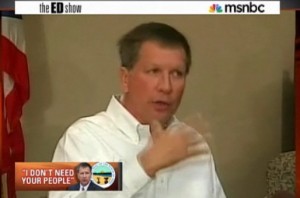 Newly-elected Ohio Governor John Kasich (R-OH) has been the subject of considerable outrage over his appointment of an all-white cabinet, the first in Ohio since 1962. Adding fuel to the fire, Kasich recently responded to Ohio Black Legislative Caucus treasurer state Sen. Nina Turner‘s (D-OH) offer to assist him in building a more diverse cabinet by saying “I don’t need your people.”

Turner appeared on The Ed Show Monday night to discuss what she considered a racially-charged remark, despite Kasich’s protestations that he was referring to “Democrats” when he said “your people.”

Host Ed Schultz, to his credit, did include Kasich’s response that he was referring to “Democrats,” but dismissed the explanation with a wink, before coming out and asking Turner, point-blank, if Kasich is a racist. Ironically, Schultz’s mistake is in believing that there’s always a black-and-white answer to that question: (from MSNBC)

Schultz’s framing misses the point that racism is a spectrum disorder. It’s not a choice between hooded klansman or Rainbow Coalitioner. Everyone has some degree of racial prejudice to overcome, and Turner’s diagnosis of “insensitivity” is one of the more insidious varieties.

Many white people have this idea that being “colorblind” is the racial ideal (an easy position to take if your own skin color is never a detriment to you), but they fail to realize that “colorblindness” in an unequal society is de facto racism. If you live in a society that still enforces forms of racial separation, “colorblindness” will support that status quo.

Kasich had not yet appointed any African-Americans to his cabinet, but that’s not for lack of trying, Nichols said. “We have reached out to two African-Americans for two different cabinet-level positions, and they passed on the opportunity.”

This is a sort of chicken-or-egg equation. Did Kasich’s apparent contempt for diversity cause those two applicants to turn him down, or did their rebuffs cause that contempt? Or is there something about Kasich’s hiring criteria that naturally weeds out qualified black applicants? Kasich’s spokesman also said that the Governor’s “your people” remark referred to “partisan Democrats who don’t agree with reducing taxes and reducing spending.”

As Turner points out, there are administrative posts that are apolitical, so can’t Kasich find any qualified black candidates for those positions? Well, by his spokesman’s own admission, qualifications are as secondary as diversity to the new Governor:

Giving Kasich the benefit of the doubt, then, he’s just a guy who can’t find people from a disproportionately hard-hit community who want to slash essential services. That makes him blind to more than just color.

Here’s an interesting sidenote, as well. Schultz struggles with the pronunciation (Kay-shits, Kay-sitch) of Kasich’s name (KAY-sick), and identifies him as a “former Fox News host.” I was a bit surprised, then, to find that Schultz actually appeared on The O’Reilly Factor when Kasich was the guest-host. What a difference a few years make.