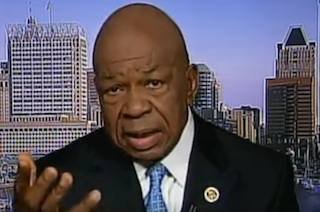 Maryland Representative Elijah Cummings appeared on Candy Crowley’s State of the Union Sunday morning with what he believed was testimony refuting any link between the White House and the group of IRS officials who targeted conservative groups over the past two years, and called on House Oversight and Government Reform Committee Chairman Darrell Issa to release full transcripts of the investigation.

In the transcript quoted by CNN, an IRS official says he does not believe that the order to scrutinize tea party groups was politically motivated, nor did it come from above.

“This man was the manager of the Cincinnati group that reviewed the exemption process,” Cummings said. “Listen up now. He was a twenty-one year veteran of the IRS. He described himself as a conservative Republican. He is a conservative Republican working for the IRS. I think this interview and these statements go a long way toward showing that the White House was not involved in this.”

As Crowley pointed out, Cummings appearance was strangely reminiscent of Issa’s appearance on her show exactly one week before, when Issa used excerpts of his investigation’s transcripts to make his case that orders to scrutinize tea party groups had come from Washington. Crowley eviscerated his claim and faulted him for cherry-picking quotes. Cummings now arrived with excerpts of his own to make the opposite case.

Crowley asked Cummings if the full transcript of the investigation would ever be released.

“I want those transcripts to be released,” Cummings said. “But he’s the chairman of the committee. We’re not in power. Now, if he does not release them I will.”

“Can we get some sort of transcript?” Crowley asked.

“I’ll release them by the end of the week,” Cummings said.