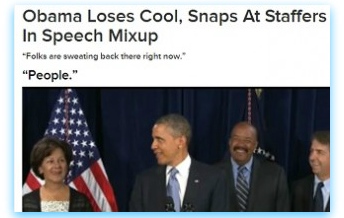 Another week, another glaring example of the lamestream media covering up for Kenyan Mau-Mau Dick-tator-in-Chief Barack Hussein Obama! With all of the devastating, Watergate-on-steroids scandals surrounding the Obama presidency, you’d expect the guy to be a mite testy, but why is it that no one reported on President Obama‘s unhinged rampage at a press conference this week, at which he apparently lost his cool, and started snapping staffer’s necks or something, all because of a little speech mixup?

Sure, lamestream liberals were all over the charming clip of the President joking around, obviously at some other press conference, about how no one had thought to put a copy of his speech at the podium, but why is it that Buzzfeed was the only site to report on the one where “Obama Loses Cool, Snaps At Staffers In Speech Mixup?”

Hide your women and children, and buckle the f**k up, because here’s Obama’s freakout, in living color:

I know what you’re thinking. That’s the same press conference. This whole thing is kinda like Rashomon, if Akira Kurosawa had been a panicky blogger with an extremely low word-count requirement, and if The Drudge Report were a popular website devoted to promoting Japanese cinema.

Before you even start, I’m sure this had Nothing To Do With Race™, and everything to do with the fact that, for some reason, Angry Obama makes for more clicks than a Michael Flatley fan club meeting at a TMJ clinic. If he ever really does get angry, I hope the media is all stocked up on Depends™.