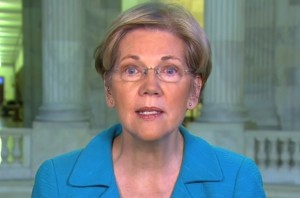 This might be a new record; Democratic Senator Elizabeth Warren somehow managed to dodge, dive, dip, duck, and dodge every single question in a five-minute interview with CBS This Morning Thursday.

The heart of the problem was that the two topics of conversation pitted the Democratic establishment against its grassroots: Barack Obama‘s endorsement of a more moderate Merrick Garland to the Supreme Court instead of a strong liberal or a minority, and Hillary Clinton‘s battle with Bernie Sanders in the Democratic primary. When asked to take sides, Warren chose… well, neither.

“Are you enthusiastic in your support of Judge Garland?” host Charlie Rose asked.

“You know, the way I think of this, filling a Supreme Court vacancy is one of the most solemn tasks undertaken by this government,” Warren said, continuing on to give an answer that chastised Republicans, but in no way alluded to whether she supported Garland.

“With respect Senator, the question I asked was will you support Judge Garland?” Rose tried again.

But Warren again demurred.“That’s the whole point right now, is that we want Judge Garland to come over,” she said. “I want to meet with him, I want to look at his credentials. I want to see him perform in a hearing, and then I want to be able to have a vote on him.”

“But Senator, the Republicans are now pointing to Joe Biden‘s comments back in 1992 when he said a nomination should not be put forward in an election year,” host Gayle King noted. “So why is this different this time in 2016?”

Warren ignored the Biden comments. “Let’s be clear, just go back and look at the history. Every single Supreme Court nominee to a vacant position has had its hearing and a vote.”

From there the conversation shifted to the 2016 race, but once again getting Warren to answer a question was like pulling teeth. “All of your female Democratic senators have endorsed Senator Hillary Clinton. You have not yet made an endorsement. Will you do it before the convention?” asked host Norah O’Donnell.

“I don’t have a timeline for this,” she responded. “But I gotta tell you, watching what has been going on the Democratic side really makes me prouder to be a Democrat. We’ve been out there talking about the issues.”

“You know your lack of an endorsement at this stage has raised some questions,” O’Donnell pointed out. “Let me ask you this; do you believe that Senator Clinton should release the transcripts of her speeches to Goldman Sachs?”

“Look, I think that our candidates are out doing what they should do in a primary. They are debating the issues,” she responded

“What I’m doing is I’m telling you what I think should be going on right now in this election,” Warren replied.

“It’s a yes or no question. Should she release the transcripts or not?” she tried one more time.

No dice. “What I told you is I think the primaries are doing what they should be doing and the candidates are being tested,” Warren said.

“What will it take for you to make an endorsement of either candidate?” King asked.

“I don’t have a timeline,” Warren said again.

“What more do you need to hear?” King pressed.

“What I’m glad to see is what is happening right now, and that is that the Democrats are out talking about the issues,” Warren replied. “I think it makes it very distinct what happens between our side and what is happening over on the other side.”

“One of the questions that is being raised: has the Democratic party and has Secretary Clinton moved from being a Clinton Democrat to a Warren Democrat?” Rose asked.

“You know, what our candidates have told us is what they will stand for as President of the United States,” Warren said.

Rose — bless him — tried one last time to get Warren to answer a question. “Is it moving to the left?” he asked.

“I think what it is is moving to where America is,” she replied.

For those keeping track at home, that was eleven dodged or deflected questions in a row.