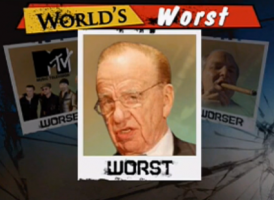 Now that Fox News is going just the slightest bit softer on the White House, there are signs that they’re turning their attention to their favorite whipping boy, MSNBC. But MSNBC’s not taking it lying down: in last night’s Countdown, Keith Olbermann slammed Rupert Murdoch, neatly summing up everything that’s dubious about the Fox newsroom. So much for baseball diplomacy.

First, a recap: as we wrote yesterday, Murdoch devoted a chunk of News Corporation’s recent earnings call to explaining Fox News’s beefs (beeves?) with the White House and MSNBC. He had this to say on the MSNBC side:

“We did not start this abuse, which we thought went way beyond … It was personal and went way beyond — not on me but on others. Finally, we had to allow people to retaliate. The moment they stop, we’ll stop. We don’t believe in it, and we don’t think it’s good business.”

A straightforward enough statement, Olbermann said, until you pick it apart and see that it implies that Murdoch not only overrides the “alleged news people of Fox, like Roger Ailes and Bill O’Reilly” in determining what goes on the air, but that Fox decides what stories to run not based on personal vendettas rather than actual news value:

Thus, simply, Rupert Murdoch has revealed his company’s news coverage and the people who deliver it are there simply to pursue their own petty vendettas. Rupert Murdoch: not only doing this carnival fun-house version of actual journalism, but stupid enough to admit it in public. Today’s worst person in the world.

Mediaite has called out Olbermann for the holes in his own news coverage, but in this case, he nailed Fox fairly well. It’s no great newsflash that Fox has an agenda in what it covers: see its blanket coverage of the White House’s feud with innocent cable network Fox News. But Murdoch’s talk of “allow[ing] people to retaliate” comes across as petty, especially so given the context.

Olbermann got some flak yesterday for playing hooky to watch baseball with his friend Sean Hannity — Mediaite commenter Puter Boi said that it proved that cable news feuds were as phony as pro wrestling. Maybe so, but this time, Olbermann didn’t hold back when he stepped into the ring.