‘Even An Imperfect Man Can Be A Hero’: Sharpton Defends Charles Ramsey From Reports On Criminal Past 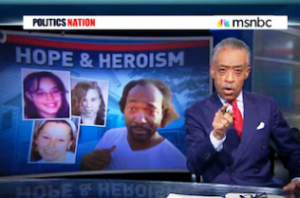 The media’s love for Charles Ramsey, the Cleveland man who helped rescue the three kidnapped women this week, was diminished slightly when the Smoking Gun website revealed he had been convicted for domestic violence more than a decade ago. Last night on MSNBC, Al Sharpton came to Ramsey’s defense, telling his viewers that “an ordinary man, even an imperfect man can be a hero.”

Sharpton pointed out that NBC has not been able to confirm the Smoking Gun’s report, “but we know what he did this week. We know what he did when he became famous for doing the right thing.” The host also went after those who are starting to “mock Mr. Ramsey’s hairstyle, his dental work, that he was unshaven, or ate at McDonald’s, or the way he speaks.” He declared, “It’s enough! He should be given credit for what he did.”

“He kicks in a door to rescue those women and some are criticizing his diction?” Sharpton asked. “I tell you what, those women were held prisoner for ten years and during that time many better-dressed people drove by that house, until Charles Ramsey heard a voice cry out for help.”

Without explicitly discussing Ramsey’s race and socioeconomic status, Sharpton clearly implied that those factors are playing into the media and public perception of the man. The inevitable auto-tuned, “songified” version of Ramsey’s first interview did little to make people view Ramsey as more than an object of mockery.

As The Atlantic Wire‘s Connor Simpson wrote the morning after Ramsey became an internet sensation, before any of the domestic abuse charges came to light, “Charles Ramsey is a hero because he called the police and helped them save three women from reportedly being raped and impregnated in a basement for a decade. But he’s a meme because he’s black and on TV.”