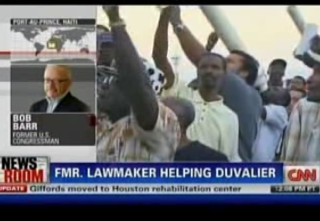 Former Haitian leader Jean-Claude Duvalier has decided to return to the island, much to the concern of those opponents whose political wounds are still far from healed. On his road home he has found an unlikely ally in his attorney, former U.S. Congressman and Libertarian presidential candidate Bob Barr, who today argued that Haiti was significantly worse now than during “Baby Doc”‘s tenure– which may be technically true, but probably merits an asterisk.

Speaking to CNN’s Fredricka Whitfield, Barr did his best to defend his client’s tainted legacy, noting that, while Duvalier “is very well aware of the personal risk that he faced coming back to Haiti,” that “paled in comparison to the needs of his people.”Barr was tight-lipped about the details of Duvalier’s return and what he wanted to accomplish, other than to say that he wanted to “see funds made available to help the relief effort which, by any reasonable estimate here, has not progressed well.”

Then Whitfield hit Barr with a tough question on his integrity: after all the American government had done to clean up Duvalier’s mess, as a former Congressman, did he see any conflict of interest? Barr seemed to take offense, arguing that the American government had not helped much and, that, in fact, “the country is in worse shape now than it was at the time Mr. Duvalier was president.” Whitfield didn’t argue that point– who possibly could?– but has anyone notified Barr that Haiti’s condition today had much more to do with nature than nurture? Barr’s argument boasts a massive logic gap: the younger Duvalier’s tenure was not plagued with a devastating earthquake followed by a cholera epidemic, and many opponents of Duvalier’s who would cite a number of human rights abuses against him would probably argue that the only thing that would make Haiti worse today than under the old regime would be a series of tragic natural disasters.

Either way, welcome back to the limelight, Congressman Barr. One can imagine this means at least one prominent 2008 presidential figure won’t stand a chance in 2012. The interview via CNN below: