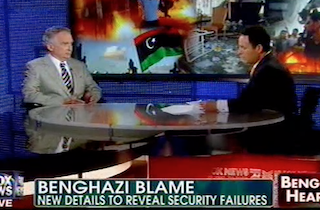 Ahead of the Benghazi hearings in which three witnesses are set to testify before the House Oversight and Government Reform Committee, Fox & Friends co-host Brian Kilmeade invited Fox News analyst Lt. Col. Ralph Peters to discuss the issue. Peters was unflinching in his criticism of the “cowardly” Obama administration — and the “establishment media” that aids it.

“Is this a national security coverup?” Kilmeade asking, explaining that the witness testimony is expected to say the administration was deceitful in its handling of the situation.

“The administration, facing the election, went into panic mode, wanted to contain it,” Peters posited. “Don’t send in the military, don’t blow this into a bigger thing. They put politics above the security of our diplomatic personnel.”

Plainly stating “I’m angry,” Peters criticized the administration for “telling so many lies” that “they make Nigerian phone scammers look like paragons of integrity.” He further hoped that the witnesses at the hearing will “objectively lay out those lies.”

The pair then revisited White House Press Secretary Jay Carney‘s response to Fox News’ Ed Henry, who asked about witnesses being blocked from talking to Congress. (Carney denied having knowledge of any intimidation.)

Saving the lives of the four Americans who died in the attack would have been very difficult if not impossible, Peters conceded — but they should have at least tried.

“You don’t sit back and say, ‘Well, gee, I hope the smoke blows over,'” he charged. “The Obama administration in this case was cowardly, duplicitous — and they sacrificed American lives for politics. And the American people need to understand that despite the fact that the establishment media would cover for Obama no matter what he did.”