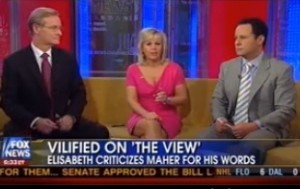 On Tuesday’s The View, Elisabeth Hasselbeck confronted Bill Maher over a joke he made about her in February, suggesting that America send her to Egypt in exchange for Lara Logan. The confrontation was a little awkward and her co-hosts — most notably Joy Behar — kind of left her out to dry.

Wednesday morning, however, Hasselbeck found a trio of defenders on Fox & Friends, with the trio noting that, “this is what all comedians do, when they want to appear partisan.” Gretchen Carlson wasn’t having it. She went after Maher, raising her voice and getting visibly angry:

“That was a STUPID comment for him to ever say in the first place, and completely offensive to any woman.”

RELATED: Bill Maher Tells Letterman: Elisabeth Hasselbeck ‘Had Some Sort Of Bug Up Her Ass’

Brian Kilmeade, meanwhile, seemed to figure out that the more they talked about Maher, the more exposure they were giving him (Maher, after all, is on all these shows to promote his book). He shut down the segment by pulling back the curtain for just a few moments. “I urge you,” he told the cameras, “not to go out and buy his book.”

Enjoy a clip of the segment on this morning’s Fox & Friends, courtesy of Fox News:

[UPDATE: This story’s headline has been edited from “Ban” to “Boycott” since its original posting, to more accurately reflect the sentiments of the hosts. We’d like to thank our wonderful, level-headed commenters for helping us sort out the error]