Fox Host And Dem Rep. In Tense Battle Over ‘Fairness’ Of Taxing The Rich 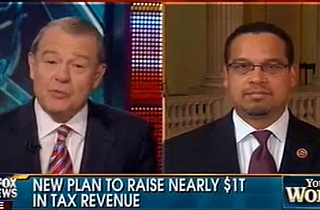 On today’s Your World, fill-in host Stuart Varney got into a heated battle with Rep. Keith Ellison (D-MN) over the issue of “fairness” in increasing taxes on the wealthy.

Varney then asked: “If we’re going to tax the rich some more, what is fair? What is a fair tax on wealthy people? And what impact on the economy if we raise taxes again on the rich?”

He brought up the example of pro golfer Phil Mickelson: “He’s California resident. On every dollar over a million dollars that he earns, he’s got to pay pay 63 cents to the state and feds in income taxes. Now is that tax rate fair?”

Through a minute or so of crosstalk, Varney kept pressing Ellison to say, point blank, that a 63% tax rate is “fair.”

“As a patriotic American I think he would agree,” Ellison continued.

“He does not,” Varney shot back. “He wants to move. So you’re saying he’s unpatriotic?”

“I think that any American who has benefited from living in this wonderful country should be happy to make sure that all Americans have a ladder of opportunity,” the congressman said. “I think that’s a good thing.”

When the Fox host pressed Ellison to say whether a 75% tax rate would be “fair,” the congressman reiterated, “Compared to what, sir? It’s a matter of comparison. Is it fair to asking women and children who need nutrition aid to go without and be hungry in the richest country in the history of the world?”

“Okay, we got it,” Varney said, indicating he was about the end the segment and prompting the congressman to ask, “Are we done? I got more. You don’t want to talk to me now?”

After a few seconds where it seemed like the segment would have to end abruptly for the hard break, Varney swooped back in and said, “I’m a European. I came from a country which taxes people tO the hilt, and the overall effect on the economy is to slow it down dramatically and create a culture of dependence.”

When Ellison attempted to answer, Varney was forced cut him off for the hard break.