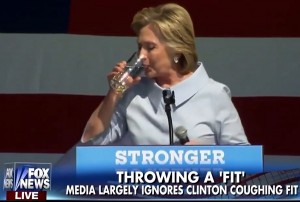 One of the great responsibilities of any journalist is to decide which stories get attention, and which ones don’t, and the eagle eyes over at Fox News have exposed a major blind spot at the “Big Three” network nightly news shows. As you may recall, Democratic presidential nominee Hillary Clinton had a coughing fit on Monday that she played off with a quip about being allergic to Donald Trump, and according to the “Brain Room” at Fox News’ Fox and Friends, the mainstream media is covering it up:

Doocey: This was a big story on Drudge and other outlets. However, the mainstream media, not so much. We asked our Brain Room to do some checking into the first two nights. Monday and Tuesday, how much did they cover that, the coughing fit?

Earhardt: 15 seconds on ABC, on Monday night. Nothing on Tuesday. CBS didn’t cover it at all, and neither did NBC.

Far be it from me to question the wisdom of the Fox and Friends Brain Room (which is, in actuality, a bathroom stall that Bill O’Reilly graffitied one morning as he read the paper, I suspect), but as it happens, the broadcast networks did all cover the coughing fit, they just did it on their national morning news programs. The three cable news networks also ran Hillary Clinton’s allergy quip a total of 32 times, 16 by CNN, 13 by Fox News, and only three by MSNBC.

The real question here, though, is the newsworthiness of the item, which is one thing for blogs and cable news who have a lot of time to fill, and quite another for nightly news broadcasts with 22 minutes to fit in an entire day’s worth of news. If you think the coughing fit is an amusing sidenote, you’re probably just fine with the level of coverage it received, but if you think Googling a candidate for medical clues is the best way to make an informed political decision, then you’re probably mad, but you probably also already saw the story on Drudge.